The MQ-650 ePAR meter is designed for underwater extended PAR measurements (400-750 nm) and already applies the sensor's immersion effect correction factor to the meter readings through firmware. The meter provides excellent measurements under all light sources, including LEDs. The meter consists of a waterproof quantum sensor attached via waterproof cable to a handheld meter. The waterproof sensor incorporates a blue-enhanced silicon photodiode and custom optical filters with a rugged, anodized aluminum body with acrylic diffuser. The underwater quantum sensor is typically used in salt water aquariums where corals are grown. Note: The handheld meter is not waterproof, only the sensor and cable are waterproof.

How is the MQ-650 different from previous Apogee quantum sensors?

The MQ-650 performs exactly the same underwater as the MQ-610, but the MQ-650 simply multiplies the PAR reading by 1.25 to account for the immersion effect. The MQ-650 is an ePAR sensor (SQ/MQ-610 Series) with a spectral range of 400 to 750 nm ± 5 nm, which can be seen in the graph below. The cutting-edge spectral response of this meter measures the newly confirmed far-red photosynthetic wavelengths compared to our full-spectrum models that measures traditional PAR (400-700 nm). 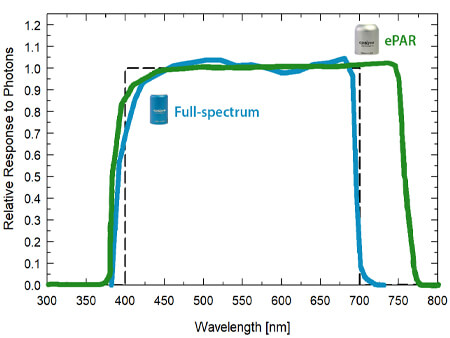 The MQ-650 is used to measure incoming PPFD in aquatic environments.