Apogee's newest, cutting-edge ePAR sensor was created in 2021 as an upgrade to our ePFD sensor and designed to measure the newly defined 400-750 nm ePAR radiation range that research has shown to be photosynthetically active, beyond the traditional 400-700 nm range. The MQ-610 has a hand-held meter, attached via cable, that displays and stores measurements. The sensor features a rugged, aluminum housing that is fully-submersible and built to withstand harsh conditions. Typical applications of ePAR sensors include measuring total ePAR intensity over plant canopies in all growing environments, monitoring and adjusting grow lights, and researching plant morphogenic activity and photobiology. Many next generation LED fixtures, the sun, and other light sources emit these newly confirmed Far-red photosynthetic wavelengths, but they have not been measurable by traditional 400-700 nm PAR meters until now.

The meter has a sample and log mode, and will record an integrated daily total in mol m-2 d-1. Sample mode will record up to 99 manual measurements. Log mode will power the meter on/off to make a measurement every 30 seconds. Every 30 minutes the meter will average the sixty 30 second measurements and record the averaged value to memory. The meter can store up to 99 averages, once full it will start to overwrite the oldest measurement with new ones. A Daily Light Integral will be recorded from the 48 averaged measurements (making a 24 hr period). Sample and log measurements can be reviewed on the LCD display or by downloading the data to a computer, however, the integrated daily total can only be viewed by downloading the data to a computer. Downloading data to a computer requires the AC-100 communication cable (a standard USB cable will not work) and ApogeeAMS software.

How is the MQ-610 different from previous Apogee quantum sensors?

The MQ-610 is an extended photosynthetically active radiation (ePAR) sensor with a spectral range of 400 to 750 nm ± 5 nm, which can be seen in the graph below. 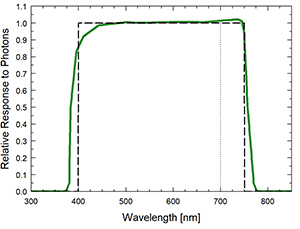 The MQ-610 is used for measuring the newest generation of LED grow lights with wavelengths outside the traditional 400-700 nm PAR range. Research has shown the value of adding far-red LEDs to fixtures to control various diseases, achieve certain photomorphogenic effects, and even gain additional photosynthesis. The extended range filter of the MQ-610 allows it to measure photons from PAR and Far-red.